This page was last verified for Vintage Story version 1.17pre1. 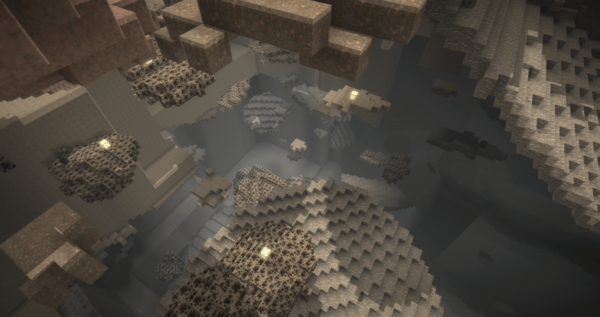 Finding ore can be quite challenging. In Vintage Story, ores are deposited in specific rock layers, broadly classified as sedimentary, metamorphic or igneous, and at specific depths. By using a prospecting pick as well as the information in this guide, players can more reliably find ores by understanding how they spawn.

Ores are distributed at random heights, in discs at various angles. Some ores have wider discs than others. Most discs average 5.5 blocks wide, though quartz discs are larger. The overall shape of the ore disc reflects the surface above and will always cover the same horizontal area. This means that regions with flat ground will have flat ore discs, and where the surface is jagged, the discs will be tilted and distorted. Thus, in flat areas, mining horizontally reduces the chances of finding an ore disc. This continues to be true until the surface is jagged enough that its slope is greater than the width of the ore disc.

As of version 1.9, ores only appear in certain rock types. Many ores are only found in some host rocks, and different rocks can have different ore qualities. Examining a rock while holding (Sneak + H), will provide information about which ores can appear in that rock type.

Ores are found in shallow deposits and deep deposits. The tables below provide information about disc generation for each ore type.

For example, on a default 256-block high world, an ore with a Y range of 0 - 0.85 using the "anywhere" disc generator can spawn anywhere between 0 - 218 blocks up (rounding to the nearest whole block). Therefore, a player would have to dig down around 40 blocks before getting a chance of finding that ore.

Ores can be found in four different grades. From best to worst, they are Bountiful, Rich, Medium and Poor. The better the grade, the more nuggets are dropped per block.

While there are many types of stone in Vintage Story, some of them can spawn in specific layers. These form a sort of rock "biome", and the rock layer in an area dictates what types of ores can spawn there. There are three main types of rock layer, sedimentary, metamorphic and igneous, with a fourth type of volcanic rock (in reality a subset of igneous rock) that has different spawning rules.

Sedimentary rocks that can spawn in layers include:

Metamorphic rocks that can spawn in layers include:

*No ores spawn in bauxite.
†Marble spawns within slate or phyllite layers.

Igneous rocks that can spawn in layers include:

*Basalt uniquely spawns above all other rock types.

Additionally, ores can be found in suevite rock, which is always an indication of meteor impact and found on the surface, and in kimberlite, an igneous rock found only near the core of the world.

For the purposes of this guide, shallow ores are those that have a chance of spawning as a surface block with accompanying loose stones. They also have a chance to spawn quite close to the surface or sea level.

Mineral ores are marked with a ✓ symbol, as they do not have different ore qualities.

* Only in red, green or white marble.
† Currently has no uses in the game.

Deep ores are not indicated by surface deposits in loose stones. Most deep ores can only be found by luck or by exploratory mining guided by a prospecting pick. Some ores, such as saltpeter, cannot be detected by the prospecting pick and must be found while exploring caverns. Gemstones do not have ore grades, but have low, medium or high potential blocks instead. For the sake of page length, ores and minerals that have no in-game uses have been omitted.

* Does not spawn as a "rich" deposit.
† Only within olivine, found inside peridotite.

Halite spawns in one of two ways, as a salt dome or as a dry salt lake.

Salt domes can spawn anywhere, but their top must originate in a sedimentary layer. An area with no sedimentary layer cannot have a halite dome. The halite readings that the prospecting pick detects in Density Search mode are for salt domes.

Dry salt lakes can only spawn in sedimentary stone top layers in deserts. In a typical temperate spawn location, with a "realistic" banded climate, you'll need to travel 13k+ blocks south to find true deserts. Gravel barrens, which you can find in temperate climates, are not hot enough. The dry salt lake will spawn directly on top of the stone in the region, but below the sand or gravel top layers. So it will take some shallow exploratory digging to find them. These dry salt lakes, while much easier to access than salt domes, will not give halite readings on the prospecting pick in Density Search mode, unlike salt domes. They are easier to find exposed in cliff faces, due to geologic upheaval. However, dry salt lakes only spawn in relatively flat and smooth areas.

Gold and silver only spawns in layers of quartz. Silver additionally spawns in galena. Both gold and silver spawn in relatively small deposits, with a radius from 1 - 4 blocks and a thickness of 1 - 3 blocks. Silver can rarely appear as surface bits.

Sylvite is used to make potash, a fertilizer that not only restores K nutrients but can permanently increase a farm block's maximum K nutrients. Sylvite can only be found inside halite.