Mining is a game mechanic that allows players to harvest ores for use in various crafting mechanics including casting and smithing advanced Tools and Weapons. You can gather minerals and form them into metal or keep them as they are as gemstones.

To begin mining, a player needs two specialized tools, the pickaxe and the prospecting pick. An optional item is a mining bag, which has 10 available inventory slots and holds ores. While the pickaxe is needed to actually harvest stone and ores, the prospecting pick is used to find them, but cannot harvest ores on it's own, as blocks broken by the propick do not drop anything.

Obtaining Metal Ores Prior to Mining

Herein lies the conundrum. The tools required for mining must be made from metal by casting, but the materials that players require to create metal tools can only be harvested when using metal tools! There are two methods available to collect enough smeltable ore nuggets (5 units of base metal) to create a pickaxe without mining.

Small stones containing ores appear on the surface of the world and are a good early game source of metal nuggets. To gather surface deposits, break the ore containing stones with an empty hand or any item to convert the stones into smeltable ore nuggets and collect in your inventory. These small surface deposits are an indicator of larger underground ore deposits. (Be sure to add a waypoint to mark the location for later mining operations.) Sometimes nuggets can be found in loot vessels located in ruins.

Copper nuggets can also be obtained by panning. See the panning guide for more information.

When rock blocks are broken using a pickaxe, rock, small stones or ores contained in chunks of stone will be dropped. The challenge is in finding the ore-containing rocks. As of game version 1.9, certain ore types only spawn in certain rock types. To determine which ores can occur in a rock type, examine a block, hold shift + H, and the handbook will provide information about what ores can appear in that rock type. For more information about natural deposits and ore generation, see the Ore Deposits page.

There are two general methods used to choose a location "Exploration" and "Prospecting". These are not mutually exclusive and work very well when combined. Players can prospect to find a region with the desired ore, and then explore caves within that region to find exposed ore to mine.

Explore the map to locate regions with rock types used in crafting (chalk, limestone) and rock types that are known to generate ores used in crafting tools, weapons, and metal items. Sometimes ores can be located by exploring caves with entrances exposed to the surface of the world. When exploring caves, it's a good idea to bring ladders to provide a way to climb up or down shafts, and lots of torches to light the cave and mark a path back out. The possibility for "Adventure" exists in every cave, so be ready to face great danger, but also to reap great rewards.

A benefit of exploring caves is that even if ores aren't present, players may locate underground ruins, which often contain treasures and materials that a player cannot acquire any other way. Static Translocators also exist in caves. These machines can be used to transport the player into uncharted regions of the world.

Mining at locations marked by small surface deposits can be a good way to find ores, but not all ores in a region will spawn in surface stones. To find deeper ores, use the prospecting pick or "propick". Prospecting can be performed on the surface before choosing to mine in an area, and help players decide which regions are worthwhile to mine based on the ores present in the chunk.

This is the first mode of the propick, which is by default always enabled. It is a chance based search system with long range - specifically, it shows the chance for specific ores to be present in a searched chunk (32x32 blocks, but all the way from surface to mantle).

To prospect, a player must break 3 rock blocks in 'close' proximity to "sample" the area for ores. The prospecting pick can only be used on rock blocks. These blocks must be located a minimum of 3 blocks apart (blocks between samples) and a maximum of 16 blocks apart. It is possible to sample three blocks within a square, or in a line where the last sample is 8 blocks away from the first sample. Upon breaking the third valid sample block, displays the densities of all the ores in the chat window based on the chunk that the first of the three blocks prospected (broken) was located in.

To interpret the information, one must understand that this tool does not detect the actual presence of ore blocks; but detects the chance that ores are present. The game uses randomly generated ore density maps whenever a chunk is generated. These determine the chance for ores to appear. Even if a player removed all the ores from a chunk, the prospecting reading would remain the same. Additionally, some ores are not detected by prospecting with this mode, like quartz or surface copper.

The display is based on the first of the three blocks broken. The game reads the chunk density map and displays the densities of all the ores in the chat window. These values reflect the potential density, not the actual ore.

From most to least dense the categories displayed are: Ultra High, Very High, High, Decent, Poor, Very Poor. This category is followed by a number in parentheses, given in parts per thousand or 'PPT' (per mille - note there are two zeros below the slash, ‰, as opposed to a normal percent sign, %, which has one zero below).

Different ores will display drastically different density descriptors for the same PPT ‰ reading (based on the rarity of the material). For instance:

Prospecting results should be similar for 4 chunks in an area because the ore densities are created from a density map generated with the world, at a resolution of approximately 32 blocks. The ore densities will tend to have a more concentrated 'center' and then decrease when moving towards the circumference. So when locating a low density reading of any desired ore, try taking other prospecting samples some distance away in other directions to find an area with a higher reading. With enough sampling, a player can locate the center of the ore field, which often span a great many chunks.

Note: The prospecting pick will not detect quartz, surface copper or rock salt (not to be confused with Halite, which does show up in this propick mode). The prospecting pick only detects ores above a certain threshold. Players will occasionally find ore deposits in a region when the prospecting pick did not indicate the ores are present. Such 'undetected' occurrences are very rare.

This is the second mode of the propick, which is by default not enabled, but can be enabled either at world creation or through a command in an already created world. It offers a short to medium range search for exact and actually available deposits in a specific place. Be aware however, using this mode will drain the tools durability considerably faster. Additionally, it also doesn't pick up on Halite - don't be too salty now :p

The easiest way to access this second mode is certainly to enable it while creating a new world. You can do so in the advanced settings ("Customzie" button) - towards the end of the list, the option "ProPick Node Search Radius" lets you switch between disabled or, if you want to use it, for what size you want it to work. The radius you select here describes the size of the cubic search area, for instance the radius 4 equals a search area of 9x9x9 blocks, 729 blocks searched in total.

If you have already created a world, you can use a simple command in chat to activate this modus - and set or change the radius. Simply type the following into the chat:

Insert the radius you want to use and enter - the final command should not have any brackets. Please keep in mind that higher radius numbers might be hard on your computer and could potentially lead to freezes. Additionally, even going with in game considerations, knowing the ores in such a big search area might be just as helpful as doing a density search in the first place. Before you will be able to switch between the two modes using the F key, you will have to restart the game once.

Similar to the density search, you will have to break a stone block with the propick, however you will only have to break one block and will get the results immediately listed in the information tab of the chat. The readings will be shown for the search area, with the broken block as the centre.

You will only be informed about actually occurring deposits in the searched area. If there are no ores in the searched cubicle, the chat will display the "no ore node nearby" message. If any deposits are found, the amount of blocks containing that ore is displayed again in words rather than actual numbers.

Smeltable nuggets do not drop from rocks when mined. Instead, ores contained in chunks of stone will be dropped. When mining, inventory space is generally at a premium, and these chunks occupy less space than "smeltable nuggets". Ores within rock must be crushed with a hammer in the crafting grid to obtain smeltable nuggets. "Rich" chunks have a higher concentration of ore and will generate more nuggets when crushed, so be sure to create smithy storage containers to store the ores!

Video Tutorial - How to Use the Prospecting Pick

You have basically 3 ways of acquiring halite, which is used to make Salt.

Buying from traders. Commodities traders sell it. Limited and costs gears, but easier to find and acquire. 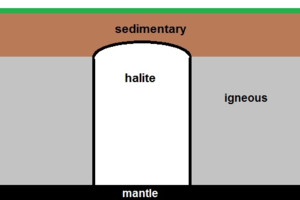 A simple diagram of how halite spawns in sedimentary layers. The top of the dome will stick out above the bottommost sedimentary layer, so it can be most readily found via horizontal mining

If you are in an area with at least one sedimentary layer (except bauxite) use the main Prospecting Pick mode (Density Mode, being the only one that shows halite readings). If you find any halite readings, it might be an area prone to spawn a halite deposit known as a "Salt Dome". Find the area with the best readings and around, and go caving or making vertical tunnels until you are in the bottommost sedimentary rock layer, or in the first rock layer that's not sedimentary. Then, go making horizontal tunnels in that level, following the rock type you're in. Once you find a pink rock, that's it, eureka!

A salt dome starts at the sedimentary layer and goes down to mantle level. It has so much salt that you might share it with other people and never run out, if in Multiplayer. In Singleplayer, once you find it, you won't need to search for a second time.

Sedimentary rocks that might have domes: chalk, chert, claystone, conglomerate, limestone, sandstone, shale Halite doesn't spawn in bauxite layers, but check below bauxite rock layers to be sure there isn't other sedimentary rocks.

Deserts have an average temperature between 15°C and 40°C and "Rarely" or "Very Rare" rainfall.

You won't have propick readings to guide you; spawning is random in deserts only.