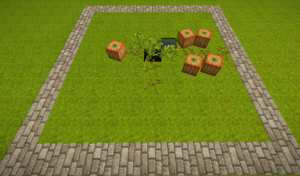 Pumpkins are a kind of vegetable crop. They have very different growth behaviours from other crops.

Pumpkins are not found as wild crops, instead seeds are rarely found inside loot vessels.

After successfully planting and harvesting pumpkins, seeds can be crafted from the full pumpkin fruits by simply putting them into the crafting grid. One full pumpkin will only turn into one seed, so planning is necessary to ensure there are enough pumpkins grown to replant the crop.

On multiplayer servers, it might be easier to trade established players for seeds rather than trying to find your own.

Pumpkins go through 8 growth stages over 7 days. They use up 30% P nutrients from their farm block. Unlike other crops, which grow only on the block they are planted, pumpkins spread out as vines from a central mother plant. Mature pumpkins grow on the vines generated by the mother plant.

Pumpkins consist of three main components: The mother plant, vines and the fruit. The mother plant follows the growth behavior defined in the crop properties and behaves the way other crops do. However, once the plant reaches stage 3 or above it has a 50% chance to spawn a stage 1 vine on any of the 4 adjacent sides as long as the the position is occupied by air or a block with replaceable >= 6000 and that the supporting block (underneath) is solid. After 6 in game days it will no longer spawn vines.

The vines rarely spread beyond 4 away from the mother plant. The longer vines grow straight out from the pumpkin therefore if planting seeds in a straight line, leave at least 8 blocks between mother plants. Plants will yield roughly 2.6 pumpkins on average.

On occasions, a maximum range of 6 has been encountered for the vines, with pumpkins growing at a distance of 7 to the mother plant. These are, however, rarely seen.

Pumpkins can be eaten whole, to provide 480 vegetable satiety. Whole pumpkins cannot be used for cooking.

Pumpkins, whole or sliced, benefit from storage in a cellar. Pumpkin slices can be pickled to further extend their lifespan.