This page is outdated.
Reason: Missing several new edible items.
The content on this page is not up to date with the most recent game update. If you do wish to contribute, please request wiki edit access on the forum or the Discord.

1 Consuming honey used to restore health in older versions. It no longer does as of version 1.16.
2 Bell peppers are unobtainable in survival gameplay as of version 1.16.
3 Lumps of fat are a valuable crafting material that should be eaten only in emergencies. 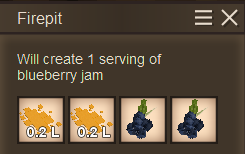 Claypot cooking is an advanced cooking method that increases the food values of all ingredients used and provides additional benefits and convenience. Cooked meals can be kept fresh for very long times in sealed crockpots; eating meals will outright halt satiety loss for a time; and the player will never waste any food from a meal when it provides more satiety than they need. Instead, they simply leave a partially-eaten serving that can be finished at a later time.

1 Liquids can be added to the pot with a bucket (1L portions), jug (0.3L portions), or bowl (0.1L portions). Pick up the liquid container with your cursor and drag it over an empty spot in the cooking pot. Use LMB to add one portion, RMB to remove one portion.

The satiety received from eating meals is equal to the sum of its ingredients. The ingredients added to create the meal determine how much satiety of each class of nutrition the player receives. In addition, the food values of most ingredients are increased via cooking, as shown in the table below.

Baking is an advanced cooking method that revolves around dough, the creation of which requires some setup. A quern must be available, which requires metal tools to craft. Additionally, a clay oven should be set up for baking, as not all recipes can be baked in the firepit, and the results there are always subpar. Plus, a Wooden Bucket, a Jug or a Bowl is needed to be filled with water. Finally, a farm is required to consistently supply useful amounts of grain, as wild crops are nonrenewable, mature extremely slowly, and reset their growth after reaching maturity.

Put firewood into the clay oven and light it with a torch. After the fire has burned out, the oven will remain hot enough to bake for quite a while - temperatures of above 200°C and falling until 160°C are sufficient. Up to four pieces of dough can be inserted at a time, and as much as four sets may be fully baked with the heat from a six-firewood preheating. The oven's temperature can be increased by firing it again, but it will never exceed 300°C.