(Redirected from Blasting powder)
This page contains changes which are not marked for translation.
Other languages:

Ore blasting bombs are a powerful tool for mining ores, although less than optimal to destroy rocks. They have a 90% chance to drop block contents on ore blocks (as in, Chunk of Quartz from a Quartz-containing stone) and a 25% chance for non-ore blocks (Granite stone from Granite rock). Bombs are more of a mid-game mining tool, requiring at least a tier 2 (copper) pick to mine sulfur ore and at least a tier 3 (bronze) pick to mine black coal. Ores destroyed by a bomb will never drop their crystallized version and large gemstone crystals will drop their constituent materials (Milky Quartz will drop quartz, Amethyst will drop violet quartz). Gems ores will drop gems at the same rate as standard ores.

Next four of the blasting powder above with one twine and one linen can used to craft an ore blasting bomb.

Using an ore blasting bomb is simple. Place the bomb and light it with a torch. Bombs placed close to each other chain together and explode at the same time. 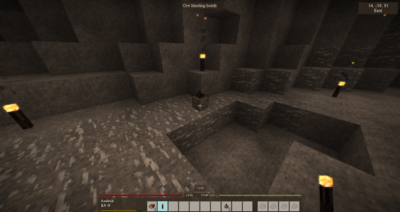 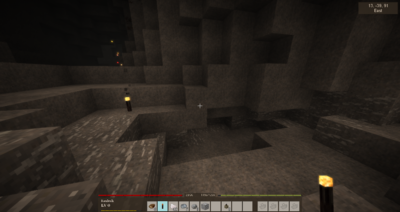