Filled skeps can be transported in one of the four bag slots, instead of a backpack or basket. Once populated, pick up the skep. Carrying a skep will cause its population to drop. It will be placed into the empty bag slot and can be carried home.

Bees search for flowers in a seven block range, in all directions. To reach a large population, bees need [5+3X] flowers, where X is the number of other skeps within their search range. Well fed populations of bees will split to fill additional empty skeps.

Additional skeps can be filled from the original, allowing players to increase the number of skeps available for harvesting. As the population of the original skep grows, the bees will divide to populate nearby empty skeps placed within 7 blocks of a filled skep by the same process that bees are captured from a wild hive. 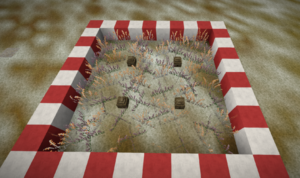 Populations of bees will hibernate (stop swarming or producing honeycombs) at 0°C. Once the temperature reaches -10°C, all bee-related timers (swarm and production) will reset, and will only resume until the temperature rises above 0°C at the end of winter.