Difference between revisions of "Classes"

Since version 1.14 of the game, players can choose to play as one of a number of different classes with tied in buffs and debuffs.

How to choose a class

After joining a new world the player enters the Character Creation screen, where the player can choose one of 5 classes. Alternatively the player can run the .charsel command to enter the Charater Creation screen again, but only once! In case you need to reselect your class on a multiplayer server, get in touch with the server admin and ask them to run the /player [name] allowcharselonce command for you, after which you will be able to use the mentioned command.

The following classes are currently available, 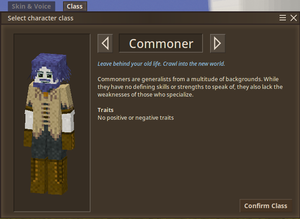 The Commoner Class as depicted ingame

The Commoner class is the default class and has no positive or negative traits, often considered as the "Allrounder" class. It's advised that players pick this class for their first time playing to get a hang of the game.

The Hunter Class as depicted ingame

The Hunter class has the Unique ability to craft a Crude bow and arrow as well as the Recurve Bow, is proficient at killing animals from range and harvesting them efficiently.

File:CMakerClass.png
The Clockmaker as depicted ingame

The Clockmaker class deals a significant amount of damage toward locusts but is frail and deals less damage to anything else.

The Malefactor as depicted ingame

The malefactor is a frail and weak class that thrives on foraging and finding broken vessels in ruins. Has an unique ability to craft the Sling.

The Blackguard as depicted ingame

The Blackguard is a durable fighter but gets hungry quicker and is less efficient at harvesting food. Has an unique ability to create the Blackguard Shortsword and Shield.

The Trailor can craft a variety of unique clothing, and repair clothing more efficiently.

1 things affected by the Foraging bonus include: