Finding wild bees can be difficult. Wild bees are a rare spawn in warm climates, but they don't spawn in climates that are too arid or too wet. The best way to find them is to turn the game sound all the way up and wander around until finding soybeans. Soybeans grow in similar environments that those where bees spawn. Bees are often heard before they are seen. At that point keep checking the trees in the area, because the wild hive can be inside or suspended from a log. If mushrooms, are nearby then the climate is too damp for bees, so look elsewhere.

Once the wild hive is located, place an empty skep within seven blocks of the wild beehive. Also make sure there are five Flowers within seven blocks of the wild hive. (If there are no flowers near the wild hive, it's a good idea to bring some to plant around the empty skep) Press 'B' for block info to see the size of the hive and number of flowers in range, though know that it takes the bees some time to find the flowers. The hive must reach a large population before it will divide and populate the skep. This takes awhile, so it's best to go do other things while waiting. Once populated, pick up the skep (right mouse button) and carry it in an empty bag (portable container) slot, so make sure there is en empty container have space available. When the skep is picked up, it will be placed into the empty bag slot and can be carried home. Don't break the skep (left click), as this will destroy the skep and might spawn a swarm of be angry bees. upon returning home, place the populated skep in a prepared "apiary". To select the skep, hold Ctrl and scrolling with the mouse wheel until the skep is selected. Once selected, right click on a solid surface to place the populated skep. At this point, ensure there are lots of flowers close by. Bees search a range of seven blocks and need [5+3 X [number of other skeps within range] flowers] to reach a large population. It is a good idea to place other empty skeps by the populated skep. As the population of the original skep grows, the bees will divide to populate a nearby empty skep. 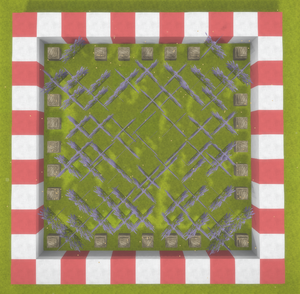 As the population grows, the entrance of the skep will turn from a dull yellow to a bright yellow as it fills with honeycomb. If a player examines the populated skep at that time the block information will show that the skep has become "harvestable". At this point, upon breaking the skep (left mouse button) will provide honeycomb and some of the cattails used to make the skep. There is also a chance that breaking the skep will spawn an angry bee swarm. One technique to avoid attacks from the angry swarm is to place straw dummies near the hives so the bees sting the decoys instead of players. Even if decoys are in place, when harvesting a skep, pick up the items and run inside to wait for the angry swarm to disperse/despawn. Be sure to close the door! Make sure the skeps are not placed near animal pens, as angry bees will attack any nearby living thing, even the animals players are currently domesticating.

The honey, when eaten, restores 0.5 health points, and can also be used to make jam, added to meals like porridge, or to craft healing poultices. The wax (stacks to 32) can be used to seal food crocks for long term food preservation, and crafted into a candles by placing three wax in a column in the crafting grid. These candles can be placed on top of solid blocks and up to 9 candles can be placed on the same block. Each time a candle is added to the block, the light level increases. These candles never burn out and look quite nice. Candles are also used to craft lanterns.