From Vintage Story Wiki
Soil/de
Jump to navigation Jump to search
This page is a translated version of the page Soil and the translation is 6% complete.
Other languages:
Deutsch • ‎English • ‎русский

Seventeen soil type variants may exist in the world, and are created during world generation. The appearance of each block indicates the nutrient levels (soil type) and the grass coverage (grass variant) indicates the climate conditions in the area.

Different types of soil are found in different places in the world and vary based on the climate. Five different types of soil exist in the world at different fertility rates: bony, barren, low, medium, and high (called "terra preta"). Each type has the following starting levels of nutrients, respectively: 0%, 5%, 25%, 50%, 80%. Soil retains its fertility levels when removed and placed elsewhere. Players can find deposits of terra preta in mild and hot areas with enough rainfall, mostly on plains and low hills.

Barren soil is found in some above ground ruins, but is a rare occurrence. Bony soil may be found buried below ruins, has no farming nutrients, and will not grow grass. 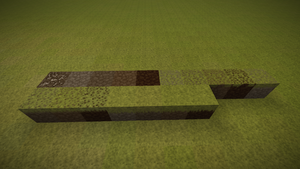 Each type of soil block (with the exceptions of bony and barren soil) has three grass coverage variants and may appear as "bare soil" with a brown top (no grass), or a green top surface, aka "grass block". Depending on climactic conditions, grass coverage appears as a continuum from sparse (patchy brown and green), patchy (mostly green), or grassy (solid green). Grass spreads from grassy blocks onto bare soil blocks as the climate allows, while grass blocks lacking sunlight lose the grass and may revert to bare soil blocks. Also, tall grass can grow/spawn on "grass" blocks.

Soil blocks may be removed by breaking with bare hands or using any tool, though a shovel is a faster method to harvest soil blocks.

Soil blocks are used in crafting both light and dark mudbrick blocks, as well as cob building blocks.

Soil blocks can be converted to farmland using a hoe. For more information, see the farming guide.

Soil blocks may be placed in the world or stored in containers.