Meteorites are found near the surface, suevite impact rock or iron meteorite piece are evidence of the presence of a meteorite below. 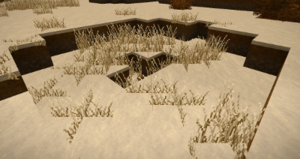 Old impact crater remains, at the center lies a meteorite. 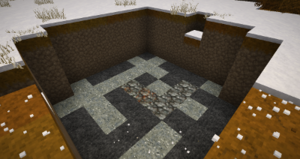 Iron meteorites contain a few meteoritic iron blocks right below the soil layer. This block needs an iron pickaxe to be mined and yields 3 to 5 iron meteorite pieces. Two of each gives one iron ingot and up to 12 pieces can be smelted in a single bloomery. The meteoric iron turns directly into iron ingots, unlike iron nuggets.

Suevite impact rock blocks have a small chance to drop a rough diamond.