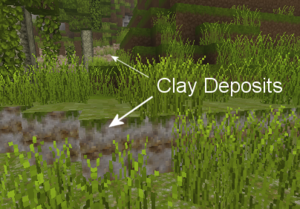 Clay is a terrain block variant created during world generation. The grass coverage (grass variant) indicates the climate conditions in the area.

Clay blocks may be removed by breaking (LMB) with an empty hand or using any tool, though a shovel is a faster method to harvest clay blocks. When broken, clay blocks drop 1-3 units of clay, which stack to 64 and may be carried in player inventory, or stored in stationary containers. Clay blocks may NOT be harvested intact and replaced elsewhere.

Fire clay may be substituted for Blue clay in any of the uses named above, but only bricks made of fire clay (fire bricks) can be used to create the bloomery functional block.

Clay blocks may NOT be carried in player inventory or stored in containers.