Difference between revisions of "Anvil"

Anvils are functional blocks used as the work surface when smithing metal items.

The first step in this process is to create an anvil mold via the clay forming mechanic. The anvil is then cast using the casting mechanic. An anvil requires 900 units (9 ingots) of copper or bronze alloy to fill the mold. Once an anvil is cast and removed from the mold, it may be placed like any other block onto a solid surface. No tools are required to break an anvil to pick it up and re-position it. 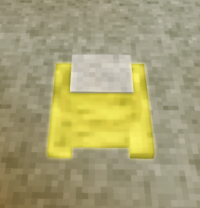 An iron anvil base with applied borax waiting for the top part.

Anvils made out of iron or meteoric iron can not be cast like anvils out of other metals. The player first has to make the upper and lower part of the anvil separately, smithing them on a bronze anvil. Then, the two parts need to be welded together.
To make a complete iron anvil, a total of 10 iron ingots are needed, 5 each for the anvil base and anvil top, as well as one powdered borax. One ingot amounts to 42 pixels added, and the anvil base and top need 196 and 210 pixels respectively.

Start the crafting process by placing a heated iron ingot on the anvil - bronze or higher anvil tier is needed. Select the anvil base and start hammering. Note that for the base, a total of 5 ingots need to be added, and there is at maximum 14 pixels worth room for error. This process might be easier when starting with one iron plate as the base, and then adding 3 more ingots, one at a time.
To lessen the chance of wasting pixels - and thus ingots - it is necessary to add one ingot, flatten it out and only then add the next - and so forth. The space on which the next anvil will be added is always the same, and the player can make sure that this space is flat and below the maximum height limit of the recipe, which is 6 pixels, or 3 ingots stacked. Keep in mind that a new ingot added will only fill in the empty pixels in that specific space, so it is recommended to keep the ingot place as flat as possible. The ingot will however rise with the rest, meaning it will be added on top of the current surface.

The anvil base needs a total of 196 pixels, divided into five layers:

For the anvil top, follow the same process. However, keep in mind that for the top part, even with careful smithing, not even one pixel will be wasted. This means there is no margin for error, and any wasted pixels will result in a sixth ingot added to finish the item. As the top part is rather slim, a plate is not helpful as the smithing base.

The anvil top needs a total of 210 pixels, divided into five layers:

After both the base and top are finished, heat both of them up in a forge. Once heated, first place the base part down on the ground. Take one portion of powdered borax and apply with a Shift click on the placed base, then add the top part. Hammer until both parts are welded together, this should take about 12 hits.

The anvil is the work surface used for smithing metal tools from ingots heated in a forge. When a heated ingot is placed on the anvil, a dialog box opens to allow the player to select the item to be crafted. Copper and Bronze items can be worked on any anvil, but iron items may only be worked on a bronze anvil.

An anvil cannot be smelted to recover the material used in creating the item, however since version 1.14, the player can use a chisel and anvil of the same metal type in the crafting grid to recover 8 ingots worth of metal. Keep in mind that both the anvil and the chisel will be destroyed in the process, meaning from the original 10 ingots, two will be permanently lost.

Since version 1.14, falling anvils do considerable damage when hitting a player or other entity.