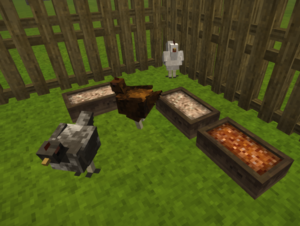 Vintage Story also includes a number of game mechanics that allow the domestication of some of the animals that roam the world. To domesticate animals, players must capture at least one male and one female so that offspring can be bred in "captivity". The animals behavior changes after multiple generations. Even after domestication, boars and bighorn sheep will still become aggressive when attacked.

For testing purposes, in version 1.14 there is a command which the player can use to change the generation of livestock:
/debug setgen [number] - with number being the generation the player wants the animal to be

As of version 1.4, the game does not have leashes or similar means to easily transport animals, either for capturing wild ones, or moving already domesticated ones. 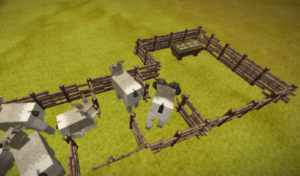 Moving animals around can be complicated after the player has already started breeding them, as animals will loose their fear of the player after generation 10, and might not easily run away or be provoked to attack and follow. Therefore, as an alternative to the above mentioned methods, a funnelling technique can be employed to move animals or even separate them if need be, for instance to cull lower generations.
To archive this, the player needs at least one trough, plenty of fence and the appropriate food for the animals. Then simply build a corridor from the original enclosure to the next one (or an in between stop). Place a filled trough in the new enclosure, and open the corridor on both ends. Make sure you are in a good position to place fences in the corridor as need be.
The animals will start walking from the original enclosure towards the filled trough, and the player should have enough time and space to place fences to separate the animals from each other. Depending on where the trough is placed, the walking direction of the animals can be influenced to give the player even more opportunity to intervene and pull animals out of the herd.
Another useful moving technique is water. Be careful, water also lifts animals up, so they can climb fences of single height.

Bighorn sheep eat animal feed placed in a large trough. Troughs hold portions of dry grass or grains and sheep will consume either grass or grain. The Ewes will need a satiety value of 10 before they are willing to mate. After a pregnancy time of 20 days, ewes bear one lamb at a time, chances for male or female are 50/50. Lambs will take 336 hours to grow up, and the Ewes will need 4-11 days break before they are ready to breed again.
Note that male sheep (and sometimes the females) always attack players when in close range, but they will stop doing so after 10 generations of breeding.

Chickens will only eat grain placed in small troughs. Hens need to reach a satiety of 6 before they are ready to mate. For now, baby chicks are not preceded by eggs - they appear like other baby animals. The pregnancy takes 9 days for the hen and there will be 1-2 chicks, with a "cooldown" of 6-9 days before the next pregnancy. The chicks will grow up after 168 hours, with a 90% chance for more hens and only a 10% chance for a new rooster.
Hens will lay eggs on the ground every 8-15 in-game days, which can be used in cooked foods but do not have any impact on breeding new chickens. Players should collect the eggs regularly, as they disappear within 2 days. 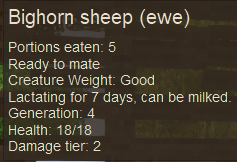 Bees cannot be domesticated, but the art of Beekeeping can help them be put in a 'controlled environment' as to be able to harvest their produce without having to kill them all off.