This page contains changes which are not marked for translation.
Other languages:

Locusts are a type of hostile enemy in Vintage Story, generally found underground. They are distinguished by their ability to climb on walls and ceilings.

Locusts spawn from cages and nest found in cave ceiling where light from the sky is less than 3, they respawn sometime after. Nest can be destroyed with a pickaxe and yields, 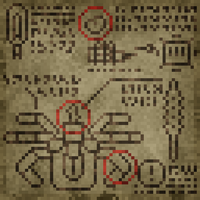